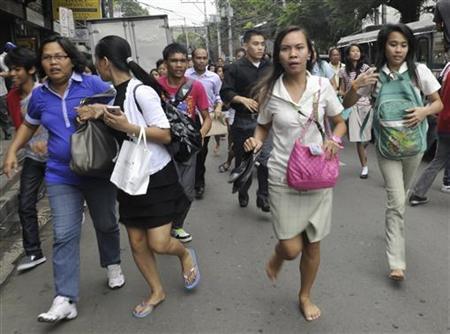 While in Manila last Saturday, I’d made up my mind to do biographies on the key characters of the battle of Red Cliff, next on my list would’ve been Sun Quan the young upstart. However, when I got back to Cebu I found the ground–literally–shaking beneath my feet.

Sun Quan will have to wait. When life blindsides you on an innocuous Monday, what do you do?

As a 6.8 and 7.0 earthquake hit Cebu and Dumaguete, people fell into a state of panic that was further flamed by rumors of a tsunami that was heading their way. My brother and I had been tasked to drive over to our grandmother’s place just to make sure that she was okay. On the way to her place, we tuned in to the local news just so we’d be up to date.

“The first quake took place at 11:49am…” the radio announcer would reiterate. He began to speak to correspondents near the coastal areas to confirm on rumors of a tsunami. Nothing.

It was just another rumor.

Meanwhile, all over Cebu, there were reports of people jumping out of their office buildings  as the shaking earth drove them to hysteria. As people became increasingly convinced that we’d share the same fate as Sendai hospitals such as Chonghua were overrun by residents from a nearby squatter’s area who insisted that they were going to climb to the top floor whether they were allowed or not.

My brother and I were at my grandmother’s house having some crackers over cups of coffee while the whole city took rumors over actual news and drove itself to hysteria. Some injuries might have been avoided had people decided to stay calm.

My sister was on field work then and she had to hide her jewelry. Looters were taking the opportunity to grab panicked people’s bags. If you were to drown in a tsunami, might as well drown with a Gucci bag, right?

I kept Japan in mind; how they promptly lined up after a real tsunami had devastated them. Wow. We sure know how to act like barbarians.

“…It is best to be calm and free from greed…”

The Art of War pinpoints anger and greed as fundamental causes of defeat. According to Sun Tzu, it is the unemotional, reserved, calm, detached warrior who wins, not the hothead seeking vengeance and not the ambitious seeker of fortune.

Words like unemotional, reserved, calm and detached, when used in such a combination almost allude to the warrior being incapable of humanity or having lost his humanity in the battlefield. Being unemotional, reserved, calm and detached, however, may be further condensed into self-control. Any decent human being who wishes to make himself significant has, at least, mastered this.

I count him braver who overcomes his desires than him who conquers his enemies; for the hardest victory is over self. -Aristotle

1. Ponder and deliberate before you make a move. -Sun Tzu

This is quintessential. This is elementary. Look before you leap. We just can’t seem to get it.

I continue to have this growing suspicion that we, Filipinos just like to be the center of action. This is the reason behind flood victims waving back at news cameras with grins splitting their faces in half. This is why the notorious Ahcee Flores acted the way she did and, most likely, the premeditation behind tsunami rumor-mongers.

Ponder and deliberate. Had a tsunami actually hit Cebu, then the radio stations wouldn’t have had time to interview correspondents by the coastal areas. Had the tsunami hit, the correspondents would have been out of coverage.

Just in case a tsunami were really on its way, would running amok really be of any help?–I doubt it. When all else have surrendered their senses to hysteria then it does make sense to rise up to the occasion as Sun Tzu’s unemotional, reserved, calm and detached warrior.

Where are the youth who will consecrate their budding years, their idealism and BRAINS... for the welfare of their country?

Jose Rizal faced his execution through firing squad with the utmost composure. He must have read Sun Tzu. Even in his final hours he still took the time to finish his Mi Ultimo Adios and wrote several letters to his loved ones. In the face of death, I would like to go with some dignity, too.

2. The host thus forming a single united body, is it impossible either for the brave to advance alone, or for the cowardly to retreat alone. This is the art of handling large masses of men. -Sun Tzu

Many times, as history continues to teach us, the general populace will respond in panic when the required conditions are present. If you want to rise to the occasion, it is not enough to come up with loudspeakers saying: “Everybody chill…”

As Zhuge Liang put it precisely:

Times of crisis can be an opportune moment for you to organize the masses. “The art of handling the masses” as Sun Tzu put it, can present itself in rare occasions but preparing for that said moment, in the words of Zhuge Liang, takes a lifetime of preparation.

Everybody chill... I got this. -Zhuangzi

Wu Wei is an idea which involves knowing when to act and when not to act. It’s a concept that’s not too easy to wrap your mind around.

A fully achieved person is like a spirit! The great marshes could be set on fire, but she wouldn’t feel hot. The rivers in China could all freeze over, but she wouldn’t feel cold. Thunder could suddenly echo through the mountains, wind could cause a tsunami in the ocean, but she wouldn’t be startled. A person like that could ride through the sky on the floating clouds, straddle the sun and moon, and travel beyond the four seas. Neither death nor life can cause changes within her, and there’s little reason for her to even consider benefit or harm. (Zhuangzi)

We like to lord over the earth only to be continually reminded of our insignificance by natural calamities. A tree grows without even trying, that is action without action. It’s a paradox.

An earthquake, a tsunami… it’s all but a microcosm in the grand scheme of history. We don’t really know what happens next. Perhaps, the best ways to keep our heads on in times of disaster is to know that there are greater forces at work.