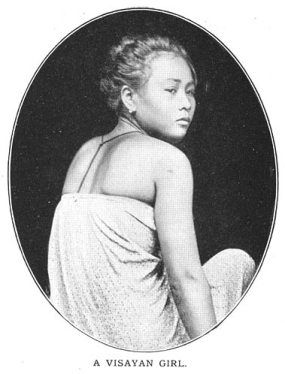 A simpler chignon on a Visayan girl.

Whether male or female, the Filipinos kept their hair long. Cutting one’s hair was a manifestation of deep mourning or punishment. It was only when the Spanish arrived that short hair was encouraged to further ‘tame’ the natives. When a Visayan saw another with short hair, they would commonly exclaim: “Inalotan ka!” To say that in modern-day Visayas would go something like: “You’re hair’s been cut short!” In the 1600’s however, it was a rough insult.

By the 1520s, the Visayans in Homonhon wore their hair down to the waist, those in Butuan had theirs at shoulder length and in Surigao it was fashionable for hair to be knotted back at the nape. Some four decades after, Cebuanos started gathering their long hair in a head cloth. In another twenty years, it was knot at the tops of the head or at the back that was all the rage in the Visayas.

Despite the changes in trends, hairstyles remained long. Women, especially, were known to grow their hair down to the ankles. The tresses would be gathered in a large chignon with curls over the forehead. Though it was a grave offense for a man to touch a woman’s hairdo, other females could easily sampalong or grab another’s tresses—perhaps, out of play or jealousy.

A perfumed ointment called Bulat, as well as flowers or sesame oil would be worked into the hair for fragrance. Datus and warriors preferred the bolder scent of ambergris, civet or musk excretions.

Other than the hair on the head, facial hair and those on other parts of the body were tweezed or removed with a pair of clamshells. Both men and women also shaved their eyebrows to resemble the crescent of the moon.

One thought on “The Visayan preoccupation with hair.”