I’m recalling our lessons back at the academy and remembering how our Professor told us: “Warriors were amongst the elite classes, status came hand-in-hand with corresponding responsibilities.”

It’s interesting to note how the times have changed.

The bahag or G-string was the most basic of clothes, along with the malong or the tube skirt. To be left at the mercy of the elements and remain victorious was a matter of masculinity for Visayans. Early records of Datus who had dealings with the Spanish were simply covered in a bahag and tattoos. 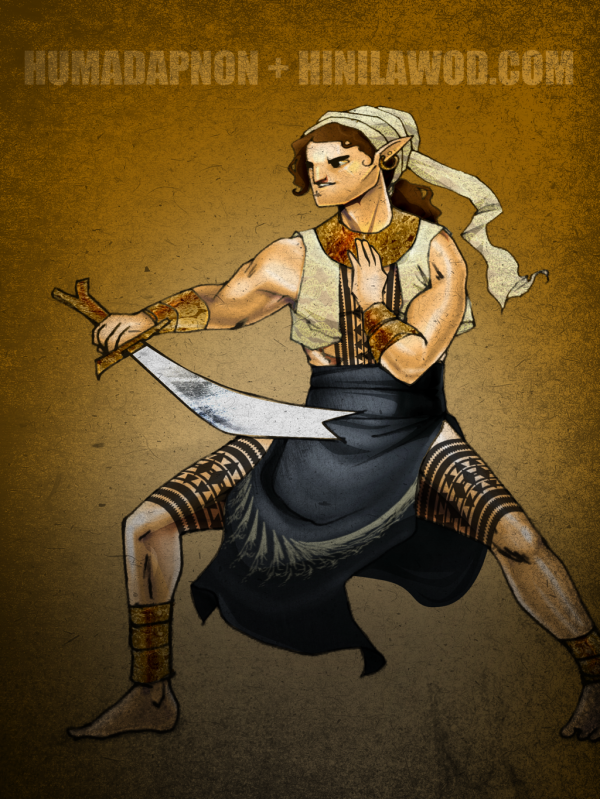 I often went back to descriptions of Sumakuel when I thought up of designs for Humadapnon, the younger brother of Labaw Donggon. He always struck me as a young upstart, still trying to make a name for himself… and, most often, messing things up in the process.

The ends of the bahag that hung loose were called wayaway; the front end was ampis and the one on the back was pakawar. One end of the wayaway was intentionally left to hang lower than the other. To wear the ampis and pakawar at similar lengths betrayed one’s lack of fashion acumen.

“Sumakuel, newly married to Kapinganan was sitting on a beautiful chair. His long hair, parted in the middle, was tied with a red putong, wound four times around the head. He was wearing an abbreviated vest over a cross-band that met at his breast. His breechcloth (bahag) was superimposed by a long beautifully woven tasseled mantle. It hung on both sides intended not to impede his walking and running, especially in a show of arms, a fight or a duel. On his side hung a kris, not very long, showing that he was adept in the use of arms and did not have to make a show of it.”

For one of the wayaway to touch the ground, however, communicated that the wearer was mourning.

3 thoughts on “A fashionable 16th Century warrior-prince from the Visayas.”